The Royal Astronomical Society announced their award recipients last week, and MIST Council would like to congratulate all that received an award. In particular, we would like to highlight the following members of the MIST Community, whose work has been recognised:
Full details can be found here: https://ras.ac.uk/news-and-press/news/royal-astronomical-society-unveils-2023-award-winners.

There have been some recent ingoings and outgoings at MIST Council - please see below our current composition!:

The STFC Solar System Advisory Panel (SSAP) is undertaking a review of the "Roadmap for Solar System Research", to be presented to STFC Science Board later this year. This is expected to be a substantial update of the Roadmap, as the last full review was carried out in 2012, with a light-touch update in 2015.

The current version of the SSAP Roadmap can be found here.

In carrying out this review, we will take into account changes in the international landscape, and advances in instrumentation, technology, theory, and modelling work.

As such, we solicit your input and comments on the existing roadmap and any material we should consider in this revision. This consultation will close on Wednesday 14 July 2021 and SSAP will try to give a preliminary assessment of findings at NAM.

This consultation is seeking the view of all members of our community and we particularly encourage early career researchers to respond. Specifically, we invite:

Comments and input on the current "Roadmap for Solar System Research" via the survey by clicking here.

Short "white papers" on science investigations (including space missions, ground-based experimental facilities, or computing infrastructure) and impact and knowledge exchange (e.g. societal and community impact, technology development). Please use the pro-forma sent to the MIST mailing list and send your response to This email address is being protected from spambots. You need JavaScript enabled to view it..

Nuggets of MIST science, summarising recent papers from the UK MIST community in a bitesize format.

If you would like to submit a nugget, please contact This email address is being protected from spambots. You need JavaScript enabled to view it. and we will arrange a slot for you in the schedule. Nuggets should be 100–300 words long, include a figure/animation, and include an affiliation with a UK MIST institute. Please get in touch!

The interior structure of a magnetised planet can be determined by using electromagnetic induction processes that results from solar-wind-driven magnetopause variability. To determine a profile of conductivity through depth within a planet, a broad spectrum of inducing fields is needed, as each discrete frequency will probe to a certain depth.

In preparation for the arrival of BepiColombo at Mercury in 2025, we have identified the opportunity to use Helios data to assess how solar wind ram pressure forcing can drive magnetopause variability at Mercury, as Helios took measurements during a similar phase of the Solar Cycle that BepiColombo is expected to see on its arrival. We find that Mercury’s magnetosphere is bombarded by a highly variable and unpredictable solar wind with a broad range of frequency signals and that the inducing field generated in response to the variable solar wind ram pressure is non-uniform across the planet’s surface.

A solar wind ram pressure time series from Helios measurements and the KT17 Hermean magnetospheric field model (Korth et al., 2017) were then used to generate a ram pressure driven inducing field spectra at two points on Mercury’s surface. In power spectra of these example inducing field spectra, frequency signals were found to peak between ~5.510-5 and 1.510-2 Hz. Heyner et al. (2021) determined that signals with these frequencies should penetrate into Mercury’s crust and mantle.

Particular orbital configurations of the BepiColombo mission will have MPO inside Mercury’s magnetosphere and Mio measuring the upstream solar wind, see Figure 1. Therefore, the dual spacecraft nature of the BepiColombo mission will be well suited to investigate Mercury’s magnetosphere’s response to external solar wind variability and allow a conductivity profile through to the mantle to be derived from observations of solar wind driven inducing field spectra with timescales seen in this work.

Geostationary satellites may cross the magnetopause during highly active times when it can be compressed inside geostationary orbit. At this time the satellite will switch from observing Earth’s magnetic field to the interplanetary magnetic field, which is usually opposing Earth’s field during compressions. The satellite will observe a drop in electron flux as it goes from measuring trapped electrons in Earth’s radiation belts to electrons in the interplanetary medium.

We compare observations from the GOES-13 and GOES-15 satellites during geomagnetic storms. We attempt to predict magnetopause crossings using models of the last closed drift shell (LCDS), the outermost stable orbit for an electron trapped in Earth’s magnetic field. The LCDS is modelled as the largest L* value that calculated by the IRBEM magnetic field modelling library (Boscher et al., 2013), using a method derived from Albert et al. (2018).

1(B) shows the satellite L* and the LCDS derived from the TS05 field model (Tsyganenko & Sitnov, 2005). Neither satellite crosses the LCDS during their magnetopause crossings, showing that brief crossings cannot be predicted with this method.

1(C) shows the >0.8MeV flux measured by the GOES satellites, showing rapid decreases in the measured flux associated with each magnetopause crossing. GOES-13 also shows a large decrease in flux as it moves into the nightside, likely due to distortion in the magnetotail.

Tomography is used to gain the 3D plasma density of the solar corona (between 4-8Rs) using white light coronagraph observations (Morgan and Cook 2019). In this work, we use the density at 8Rs (e.g. figure 1a) to estimate velocity, providing an inner boundary condition for a heliospheric solar wind model. The results show that tomography can provide a valid (or improved) alternative to traditional photospheric-based magnetic models.

Figure 1 b) compares the output of HUXt based on Tomography-HUXt and MAS inner boundaries (Linker et al. 1999), where the MAS velocities have been optimised similarly to the tomography velocities for CR2210 (Nov 2018). Tomography-HUXt model outperforms the MAS-HUXt model: tomography-HUXt gives a MAE of 47.9 km s-1 compared to the 53.58 km s-1 of the MAS-HUXt model, and a higher Pearson correlation coefficient of 0.74 compared to that of MAS-HUXt (0.56). This work shows that inner boundary conditions derived using tomography are a valid alternative to magnetic models such as MAS.

Our current work investigates a more advanced relationship between coronal densities and velocities, and provides improved solar wind predictions over a whole solar cycle. This scheme is implemented as part of the SWEEP software suite for the UK Met Office's space weather forecasting capabilities from 2023 onwards.

Our work here combines observations and ensemble numerical simulations to study the effect of temporal variability in radiation belt physics. Kinetic wave-particle interactions in Earth’s outer radiation belt are an effective way to energize and scatter high-energy electrons. A Fokker-Planck equation is often used to model the wave-particle interactions, and we studied the way it responds to the temporal variation of the quasi-linear diffusion coefficient in the case of pitch-angle diffusion due to plasmaspheric hiss. We used stochastic parameterisation [Berner et al., 2017] to describe the temporal evolution of hiss diffusion coefficients in ensemble numerical experiments, guided throughout by observations of wave activity and plasma parameters from the NASA Van Allen Probes. Ensemble solutions of the Fokker-Planck equation depend significantly on the timescale of variation, varied here between minutes and hours. We analysed timescales over which it is useful to construct diffusion coefficients and conclude that there is a useful maximum averaging timescale that should be used to construct a diffusion coefficient from observations. This timescale is likely less than the orbital period of most inner magnetospheric missions. Although arithmetic averaging of inputs to diffusion coefficients is not recommended [Watt et al., 2019], arithmetic drift-averaging of the diffusion coefficients themselves can be appropriate in some cases. We found that in some locations, rare but large values of the diffusion coefficient occur during periods of relatively low number density. Ensemble solutions are sensitive to the presence of these rare values, supporting the need for accurate cold plasma density models in radiation belt descriptions. 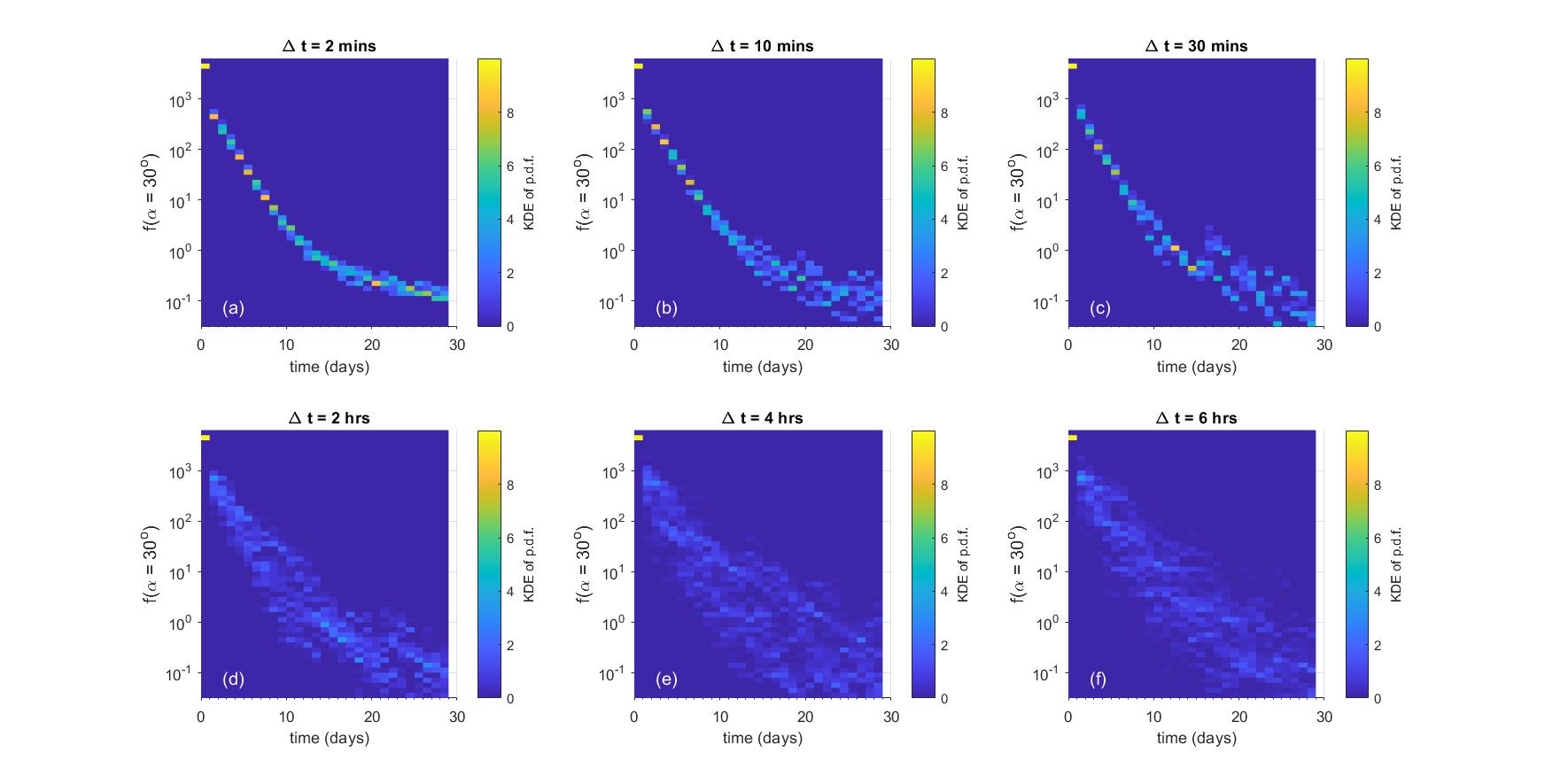 Filling in the gaps in the UK magnetic field coverage

Monitoring the ground magnetic field variation during space weather events, such as geomagnetic storms, is important for understanding and modelling their potentially hazardous effects on power, rail, and pipeline systems. The UK has three geomagnetic observatories in Lerwick, Eskdalemuir and Hartland. These form an approximately north-south line in latitude but have little variation in longitude. To expand the coverage in the east-west directions, as part of the SWIMMR N4 project, the British Geological Survey geomagnetism team have installed three new variometer stations in Northern Ireland, Leicestershire, and Sussex (Figure 1, left). These systems consist of a three-axis vector fluxgate magnetometer, a digitiser/logger computer and a 4G modem to transmit near-real-time data. The systems use batteries and a solar panel for independent power supply (Figure 1, centre).

Two systems were installed in fields in rural areas, at Florence Court (FLO) National Trust and near Market Harborough (LEI) while the third is located at the Space Geodesy Facility in Herstmonceux (HTX). The magnetic data quality is good and suitable for space weather monitoring purposes. The three new variometers fill in the ‘gaps’ between the BGS and other INTERMAGNET observatories reducing the inter-site distance to less than 400 km (Figure 1, right), thus improving the overall coverage.

The variometers will run for two years initially as part of the SAGE project to enhance geoelectric field modelling capabilities in the UK.